On Thursday, the Kosovo Foundation for Open Society (KFOS) marked the 30th anniversary of the Open Society Foundations (OSF) in the Balkans with a virtual event gathering former and current partners, colleagues and friends on Zoom.

The event, organized as part of the 30 Years Initiative, showcased a mix of speeches, short testimonies and a live panel with distinguished speakers reflecting on OSF’s legacy in the Balkans.

The KFOS event kicked off the region-wide initiative – a  virtual tour visiting all Balkan capitals from April 22 until June 17, when it will make a stop in Belgrade where thirty years ago George Soros founded the Soros Foundation for Yugoslavia.

In Kosovo, the Foundation staff, board and partners used this opportunity to look back at three decades of philanthropy that has strived to build a democratic society in Europe’s youngest state.

During his speech Shllaku noted that OSF spent approximately 73 million dollars in Kosovo in the past thirty years. “Only in the post-war period — the Foundation has awarded approximately one grant per day,” Shllaku said. 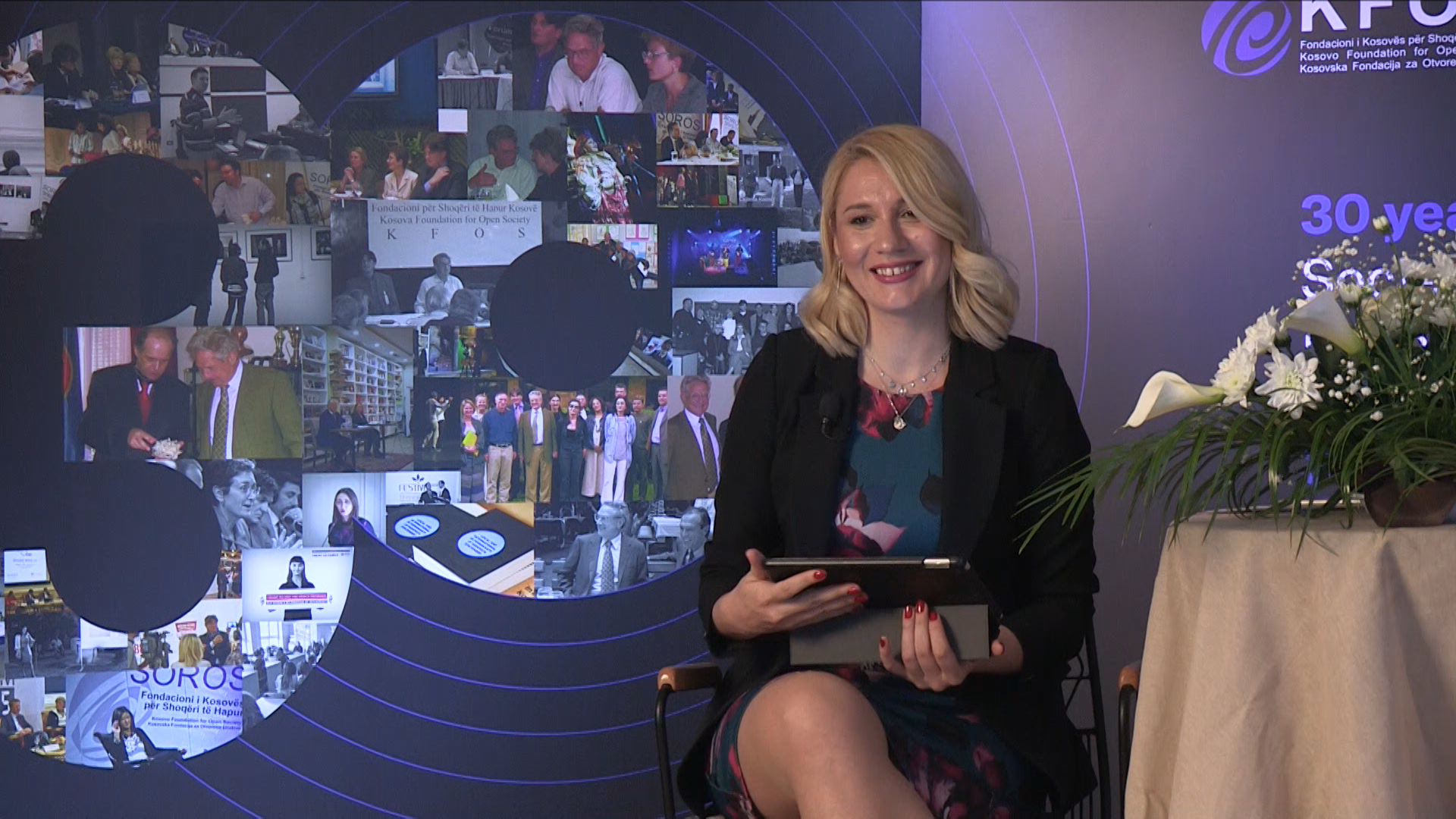 KFOS Board Member Donika Emini during the event.

“We walked together with Kosovo; we stood close to the developments that were as dynamic as they were fragile; we believed that we could help in building an open society,” Shllaku said delineating four distinct phases of the foundation’s work: segregated Kosovo in the 1990s; working with refugees in Macedonia during the Kosovo war; post-war state-building; and post-independence advocacy efforts.

Shllaku talked about working in building a parallel education system for the segregated Kosovo Albanians in the 1990s and helping refugees in Macedonia during the Kosovo war in 1999.  He also mentioned the challenges the foundation’s work faced in building a post-war Kosovo, and since the Kosovo independence.

“Only after the declaration of independence in 2008 did the country see the light at the end of the tunnel of post-war recovery, marking the beginning of a new period in which the Foundation takes on an advocacy role,” Shllaku explained.

After Shllaku’s speech, a video titled “Working for an Open Society in Kosovo” featuring former staff and board members, as well as close collaborators of the Foundation, was broadcast.

The testimonials were followed by a live discussion about the OSF legacy and the future ahead with a panel featuring Lulzim Peci, political scientist, diplomat and a KFOS Board Chair; Veton Surroi, writer and public intellectual; Venera Hajrullahu, civil society development Expert and Miodrag Milićević, Executive Director of NGO Aktiv.

Speaking of OSF’s legacy in Kosovo and how the foundations became involved in Kosovo, Surroi emphasized Soros’ own involvement.

“Both George Soros personally and Ariel Neyer at the time were engaged personally in a quest against totalitarianism. And Kosovo was the last totalitarian challenge of the 20th century,” Surroi said. 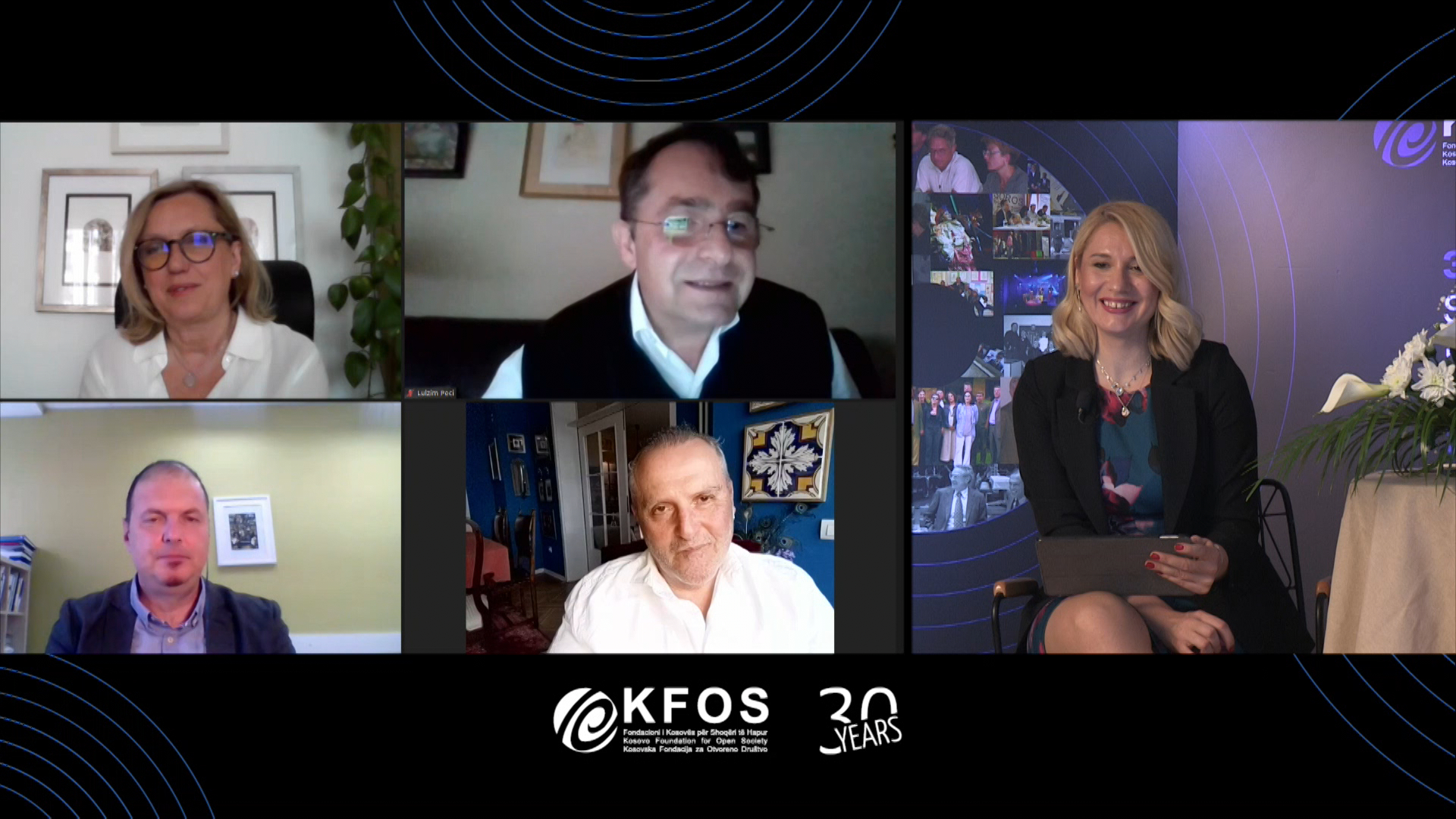 Panel discussants with moderator during the event.

“The space that KFOS provided was one of a kind. It was a center towards which gravitated intellectuals, activists, artists, all ages and profiles, a space nurturing diversity innovation and out-of-the box thinking,” Haullahu said, adding that despite its accomplishments, the work was far from over.

“Today, not only we're not done but new challenges added to the old ones, and it seems to have some kind of unfinished business in all areas. So these challenges, not even advancing, but maintaining what has been achieved has become a challenge,” Hajrullahu said.

Current Board Chair and executive director of Kosovo Institute for Policy Research and Development (KIPRED), Lulzim Peci emphasized the important role that KFOS has played in advocacy by establishing durable platforms such as Forum2015, originally founded in 2003.

“The Forum is the most sustainable and the most vocal platform for presenting the policy ideas and the altenrative policy thinking inducing political debate,” Peci said, adding that an important aspect to KFOS’ advocacy work was its nonpartisanship and ability to work with parties across the political spectrum.  “Forum was successful because it was nonpartisan, it was able to include all antagonistic players in Kosovo and it still does the very same thing.”

Reflecting on the turbulent times in which the region has gone through in the past 30 years, Milićević, who runs one of the main Kosovo Serb NGOs in the country and the Civic Energy Center (CEC) in Mitrovica North, said that OSF’s played a crucial role in supporting civic activism.

“It is also evident that the engagement of the foundation in the Western Balkans has tremendeously contributed to exploring new and innnovative approaches to fostering positive social change through grassroot civil activism at the community level,” Milićević said.  “In this respect KFOS, always had courage to seek the modes of civic activists as agents of positive change at the community level and create a momentum for the formation of a more open, diverse and tolerant society.”

The discussion which included questions from the guests and more reflections by the panelists can be viewed in full in the video below.